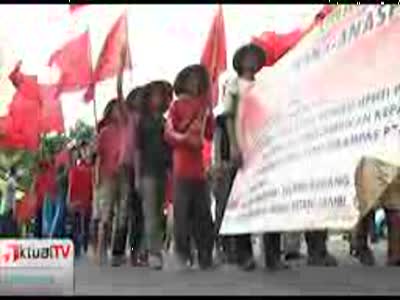 “A week after being shut down while the Action Walking Suku Anak Dalam 113 and Farmers of Jambi to the State Palace in Jakarta, until this day there has been no concrete steps undertaken by the Regional Office of the National Land Agency (BPN Regional Office) in Jambi Province,” said Coordinator of GNP 33 to Triksakti, Kamal Alif, in a statement on Thursday (14/4).

He revealed, on March 29, 2016 ago, the Ministry of Agricultural and Spatial Planning has issued Decree No. 1373/020 / III / 2016 containing the command to Jambi BPN Regional Office to restore the land area of ​​3,550 hectares owned Suku Anak Dalam 113. The Ministry of Agricultural and Spatial refers to the Decree of the Head of BPN RI No 3946 / 16.1-300 / X / 2012 dated October 30, 2012.
In the process, BPN Regional Office of Jambi province actually invited by the company PT Asiatic Persada and interested parties today, Thursday, April 14, 2016. That is, with the agenda to discuss the pattern of 2000 hectares which is clearly contrary to the decree of the Minister of Agrarian and Spatial Planning.

“This is clearly contrary to the decree of the Minister of Agrarian because it is not a disputed area and has been since the beginning rejected by Suku Anak Dalam 113,” said Alif.

“What is done by BPN Jambi is LOGIC NEGATIVE THINKING one state agency against a decision on it that have authorized institutions. BPN Regional Office of Jambi’s attitude would be a bad precedent for the performance of Jokowi’s Goverment,” he continued.