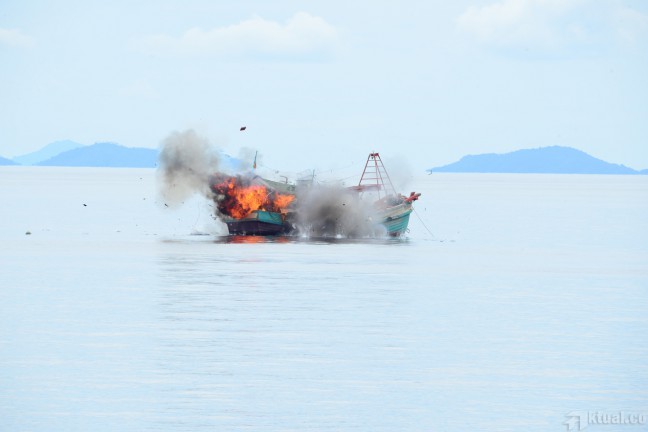 Politicians of Gerindra assess policy Gerindra Minister Susi was a big mistake. Given the location of the bombing is a favorite tourist area local and foreign tourists for swimming or snorkeling because of its clear water and underwater natural beauty.

He said, people around the livelihood from tourism and fisheries sectors have protested the policy of the Minister of Susi. Because the wreck of waste and an eyesore.

“I hope that the national police investigate marine pollution Pangandaran. Mrs. minister has often reminded about the bad effects of the bombing of the ship, but the warning was not heeded,” he said, in Jakarta, Thursday (23/6).

Besides, he said, the pollution of violating Law No. 32/2009 on the Protection and Environmental Management. In Article 99 of Law explained, everyone who due to negligence has caused violated ambient air quality, marine water quality standard, or standard criteria of environmental damage, eating is punishable by 1-3 years imprisonment and a fine of Rp1 billion to 3 billion.

Not only that, the bombing of the ship also violated Law No. 17/2008 on Shipping and the rules of IMO (International Maritime Organization) which has been ratified by Indonesia.

“Article 229 of the Shipping Law states, each ship is prohibited from disposing of waste, cesspit of water, waste, and toxic chemicals into the water. Sanctions provided for in article 325, which is two years imprisonment and a fine of Rp300 million,” said Bambang.

Not to mention the impact of disruption in the flow of shipping. Because the location of the bombing is just one mile from the beach.

Sinking according to him also violated the rules of IMO (International Maritime Organization) related to the disposal of organic material to the sea. In fact, it should be filtered out among others by OWS (oil water separator) at a distance of at least 25 miles from shore.

“We hope that President Joko Widodo rebuke and evaluate the performance of the Minister of Susi, for careless implement policies that damage the environment and harm to the community,” he said.

As is known, the MV Viking measuring 1,322 GT bombed near the White Sand Beach Pangandaran (14/3). After being bombed, the vessel suffered a leak so that the waste pollute the ocean until Saturday (8/6). (Ahmad H. Budiawan)