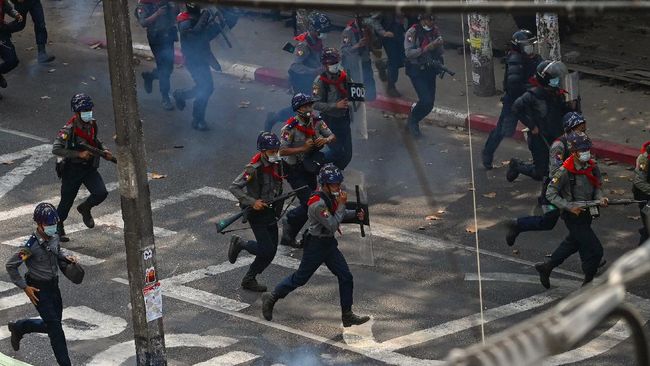 Muhyiddin especially used strong language in an apparent attack on the junta, which has shot and killed more than 200 mostly peaceful protesters since it seized power on Feb. 1 after a resounding election victory in November for ousted leader Aung San Suu Kyi’s National League for Democracy (NLD).

“We in Malaysia and the larger ASEAN community cannot afford to see our brotherly nation of Myanmar become so destabilized at the hands of a selected few, who seek to promote their own vested interests,” Muhyiddin said in a statement, supporting Jokowi’s call for an urgent meeting of Association of Southeast Asian Nations (ASEAN) leaders.

“It is clear that the current political struggle only victimizes the common people of Myanmar. This has no place in the values of our beliefs, conscience and culture.

“It contradicts the principles enshrined in the ASEAN Charter, which we in ASEAN commit ourselves to promote and protect so that peace, security and prosperity for our region is guaranteed.”

Muhyiddin said that Malaysia was “gravely concerned over the tragic situation” in Myanmar and that he was “appalled by the persistent use of lethal violence against unarmed civilians which has resulted in a high number of deaths and injuries, as well as suffering across the nation.

“There is no question about it – the use of live ammunition against peaceful protests is unacceptable. This deplorable situation must stop immediately.”

The 10-member ASEAN has come under fire from critics for its lukewarm response to ending the escalating crisis in its backyard. Indonesian launched a diplomatic effort immediately after the coup but its efforts appeared to be futile, with the junta continuing to gun down peaceful protesters.

About 40 journalists have been arrested since the Feb. 1 coup, with roughly half still in detention, including Thein Zaw of The Associated Press. Two more journalists were arrested on Friday.

Jokowi called “for an immediate end to the use of violence in Myanmar to prevent further loss of lives,” saying the safety of the Myanmar people should be given priority.

“I will hold talks with the Sultan of Brunei Darussalam as the chairman of ASEAN for the possibility of an ASEAN summit to discuss the crisis in Myanmar,” he said.

Brunei, a tiny sultanate on Borneo island, holds the rotating chairmanship of ASEAN, which aside from Indonesia, Malaysia and Myanmar, includes Cambodia, Laos, the Philippines, Singapore, Thailand and Vietnam.

Jokowi urged parties in Myanmar to start dialogue and reconciliation to restore democracy, peace and stability.

The United States and the European Union have been ratchetting pressure on the junta to end the violence and restore democracy in Myanmar.

EU foreign ministers are on Monday set to approve sanctions on 11 junta officials over the military coup there, while in Washington on Friday, the U.S. House of Representatives in a resolution urged the junta to allow the elected Parliament unseated by the coup to resume its work.

House lawmakers also condemned the military takeover in Myanmar, demanding the release of all people detained and restoration of media freedom.

“The TNI [Indonesian Armed Forces] is always ready to provide assistance and share its experience in building professional armed forces in a democracy,” Hadi told a virtual meeting of ASEAN defense chiefs.

Indonesia, under the leadership of former Gen. Susilo Bambang Yudhoyono, the country’s first directly elected president, played a significant role in Myanmar’s democratic transition about a decade ago.

Yudhoyono said on Twitter Friday that he backed Jokowi’s call for an immediate high level meeting of ASEAN to contain the crisis in Myanmar.

“This initiative is appropriate with Indonesia’s traditional role as a global peacemaker and peacekeeper,” he said.

Yudhoyono helped mediate conflicts between the Myanmar government and ethnic minorities, provided input on drafting democratic laws, and invited officials to learn about democratic institutions. But those interactions waned under Jokowi, analysts have said.

Shortly after the coup, Malaysia and Indonesia led calls for a special ASEAN meeting on Myanmar, but it failed to reach a consensus on demanding the immediate release of Myanmar’s civilian leader Aung San Suu Kyi and others detained by the military.

Instead, ASEAN merely called for a halt to violence in Myanmar and urged dialogue to end the crisis.

In the first known face-to-face meeting between Myanmar’s military government and foreign diplomats, Indonesian Foreign Minister Retno Marsudi told the junta’s envoy in late February that it must listen to Myanmar’s people, refrain from violence and allow a democratic transition process.

But the calls were unheeded.

“ASEAN does not have the instruments to impose sanctions, but it can put pressure on the junta to stop violence and open the door to dialogue with the NLD leadership,” Dewi told BenarNews, referring to the party that won the November election.

Dewi said that it would be challenging for ASEAN to come up with a common stance because of different views among member states on the coup.

“At ASEAN, decisions on politics and security must also be made by consensus. So it’s difficult for ASEAN to take a firm stance,” she said.