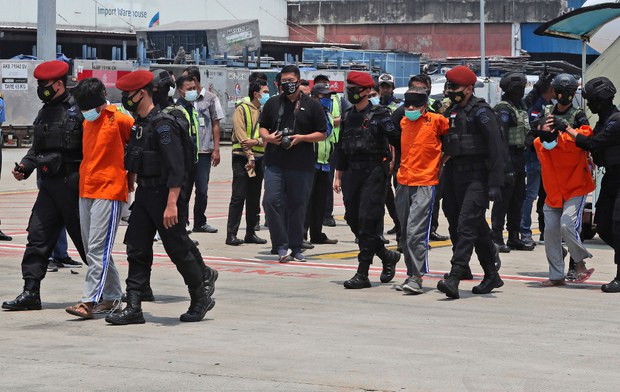 Jakarta, Aktual.com – Indonesian police said Wednesday they had arrested five more members of the Jemaah Islamiyah militant network as part of a dragnet that has snared nearly 50 suspects from the al-Qaeda-linked group in recent weeks, a spokesman said.

One of the suspects arrested on Wednesday – and who authorities identified only by his initials – was picked up in Tangerang, near the capital Jakarta, while the four others were caught in North Sumatra province, national police spokesman Brig. Gen. Rusdi Hartono said.

“A.M. was in charge of fundraising and was also tasked with conducting entrepreneurship training for all JI members,” Rusdi said in a statement.

The 54-year-old suspect is believed to have taught other members business skills so they could contribute money to Jemaah Islamiyah, Rusdi said. Indonesian authorities blame JI for the country’s deadliest terror attacks – twin bombings that killed 202 people in Bali in October 2002.

The police spokesman did not provide details about the suspects arrested in North Sumatra, but said officers had seized 31 donation boxes from the men.

Earlier this week, the anti-terror police unit Densus 88 announced it had nabbed 22 other suspects in raids in Jakarta and Sumatra.

With the latest arrests, police have rounded up at least 49 JI suspects since late February. Police said most of them were linked to an East Java cell led by a militant named Fahim, a senior JI figure who was arrested on Feb. 26.

“They placed most of the boxes in conventional food stalls because they do not need special permits. They only need to ask permission from stall owners,” national police spokesman Argo Yuwono said in December.

JI members contributed between 5 and 10 percent of their monthly income to the organization, according to the Center for Radicalism and Deradicalization Studies (PAKAR), a private Indonesian think-tank.

On Monday, House of Representatives member Rudi Hartono Bangun called on the government to monitor organizations that collect alms, or zakat, from Muslims, because of fears that such money could be used to fund terrorism.

“We must not allow terrorists to get operational funds from zakat paid by citizens,” he told a parliamentary hearing with the National Alms Agency (Baznas) and the Indonesian Islamic Endowment Board (BWI).

Only 11 percent of funds raised by charities affiliated with militant groups was used for social and religious activities, according to Garnadi Walanda Dharmaputra, a researcher at the International Association for Counter-terrorism & Security Professionals, who cited a study by this group.

Among the foreigners arrested were suspects from Indonesia and the Philippines, Hazani told a local newspaper Daily Express last month.

He said Sabah could see attacks similar to the Bali bombings of 2002 and the attack on the J.W. Marriott hotel in Jakarta a year later, if law enforcement did not monitor and halt JI activities.

In Indonesia, police have stepped up arrests of suspected JI members since late last year.

Last November and December, police announced the arrest of Aris Sumarsono (also known as Zulkarnaen), JI’s military commander during the 2002 Bali bombings, and Upik Lawanga, who police said was an expert bomb maker.

Aris had been on the run from the authorities for 18 years. Upik was allegedly involved in several attacks in Central Sulawesi province between 2004 and 2006.

Although Indonesia banned Jemaah Islamiyah in 2008, the government gave it space and autonomy to engage in social welfare, charitable, educational and religious activities, as long as its members eschewed violence, counter-terrorism analysts had said.

“Indeed, in 2018, some Indonesian officials naively saw JI as a potential off-ramp for members of Islamic State and sought JI’s assistance in de-radicalization programs in exchange for a green light to operate,” scholars Zachary Abuza and Alif Satria said in a column for BenarNews last December.

JI has also used the Indonesian government’s lenience to rebuild its core foundations systematically, and has set up palm-oil plantations in Sumatra and Kalimantan to fund its leaders and expansion, they wrote.

Amy Chew in Kuala Lumpur contributed to this report. (VOA)