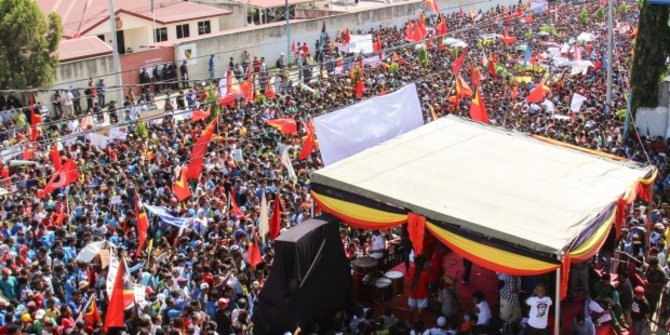 Dili, Aktual.com – The rally were carried out more than 10 thousand citizens of the Democratic Republic of Timor Leste to Australia’s provocation still took place on Wednesday (23/3). The rally was held in front of the Australian Embassy in Dili. The crowd demanded that the negotiations be done related to the management and the maritime boundary with Australia is considered to be very detrimental to Timor Leste.

Protesters consists from students and veteran of East Timor’s long struggle for independence, the government officials, high school students, to NGO activists and driven by element MKOTT (Movementu Cons Okupasun Tasi Timo) or Movement Against Occupation of the Timor Sea.

Xanana, according to him, is visiting Afghanistan to attend the Conference of the States Poor. The boundary line of marine areas of Australia in the Timor Sea rated by demonstrators are entered into the marine area of Timor Leste or not in accordance with international law. It means, Australia has been to expand the sea territorial or in occupation of Timor Leste.

Meanwhile former President and Prime Minister of Timor Leste, Xanana Gusmao, calling for people to protest. The rally that took place on 22-23 March 2016 is the largest since the country’s independence from Indonesia in 1999.

“We must stand firm and raised voice that Canberra should negotiate with us (Timor Leste),” said Xanana.

Separately, Prime Minister of Timor Leste Rui Araujo wrote to Australian Prime Minister Malcolm Turnbull earlier this year to ask them to talk about a permanent maritime boundary in the Timor Sea.

Turnbull responded by offering bilateral talks, but refused a request to hold a special discussion on the issue of maritime boundaries.

Current conditions, the protesters shouted “remove timor’s oil” and “negotiations now” and demanded the case be brought back to court.

“As large and powerful country in the region, Australia does not have to use their power to continue to steal our future from the Timor Sea,” said Juvinal Dias, organizers of the protest movement against the Occupation of the Timor Sea.

“Australia must come to discussion in good faith to negotiate with Timor Leste (East Timor).”.

Many former of Timor Leste activists of the Australia will join the rally, which is planned for this week in Melbourne, Sydney, Adelaide, Jakarta, Manila, and Kuala Lumpur, to mark the anniversary of Australia withdrew its recognition of the maritime boundary in accordance with international law.

As is known, the agreement Timor Sea between Timor Leste and Australia signed on May 20, 2002 (the day of restoration of independence of Timor Leste), which essentially agreed petroleum exploration in the Timor Sea jointly by both countries.

Vice-signer at taht time was John Howard (Australia) and Mari Alkatiri (Timor Leste). This Agreement shall come into force on 2 April 2003, after an exchange of diplomatic notes, starting from May 20, 2002.

This agreement expire 30 years from the date of signing with the provisions of the seabed boundary between the two countries have clear provisions. However, in the Maritime Timor Sea Treaty in 2007, the duration of this agreement was extended until 2057.

This agreement has not been related with any territorial maritime agreement between the two countries. This agreement was ratified to replace the Timor Gap Treaty signed by Australia and Indonesia on December 11, 1989. The agreement is no longer valid after Timor leste’s independence from Indonesia.

Although slightly different, the Treaty laid Timor Leste in the same position with Indonesia in the Timor Gap Treaty.

Timor Leste has lost around USD 5 billion (Rp 66 trillion) royalties and tax revenue in the Timor Sea since independence. Though the figures were enough to cover all of the state budget for three years.

Which is still fairly young country affirm that they will prosper from royalties and taxes exploitation of the Timor Sea if the norms of the United Nations Convention on the Law of the Sea (UNCLOS) adhered to Australia. When referring to UNCLOS, the Timor Sea, which has reserves of oil and gas, will be located in their territory.