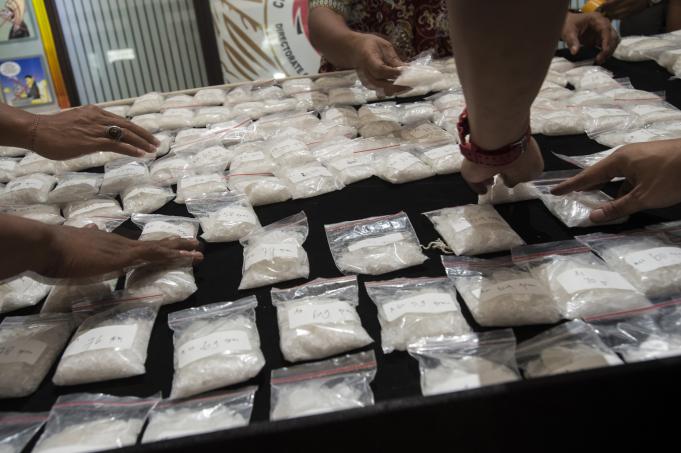 Jakarta, Aktual.com – Rohwani (28) and Saeful Anam (28) who works as a guard cafe of internet arrested police officers in Penjaringan Tanjung Priok Port, North Jakarta on Wednesday (10/2) night. Both were found to be crhystal- meth dealers.

The arresting of traffickers of illicit goods is based on information from local residents who complained that many youth who often use crhystal-melt (ngefly) if the return of the cafe of internet.

After getting this information, the police directly conduct reconnaissance in the cafe and not long after the police immediately arrested two traffickers from Serang and Makasar.

“We conducted a raid on the cafe and the results we found a package of cigarettes contains inside two packs of chystal-meth weighing 4.5 grams stored in the CPU. Then clear plastic, weights and suction methamphetamine, “said Head of Public Relations Jakarta Commissioner Police Mohammad Iqbal, Jakarta, Thursday (11/2).

Iqbal explained, from the recognition Rohwani, he hide methamphetamine use it in the computer’s CPU to trick the clerk if carried out raids.

“Usually the buyers it ordering via sms or calling him. After the deal with the price, the buyers came to the cafe “he said.

They used to buy 1 package of methamphetamine worth Rp700 thousand from a bookie named Roni and both joint to buy illicit goods are Rohwani Saeful Rp300 thousand and Rp400 thousand.

“Then by the two actors, a package that will be split into four. Then resold for Rp250 thousand of pack, “said Iqbal.

Currently, the two actors have been secured at the Port of Tanjung Priok Police for further investigation. “We are also Roni, who is bookie that had been distributing chrystal-meth,” added Iqbal.